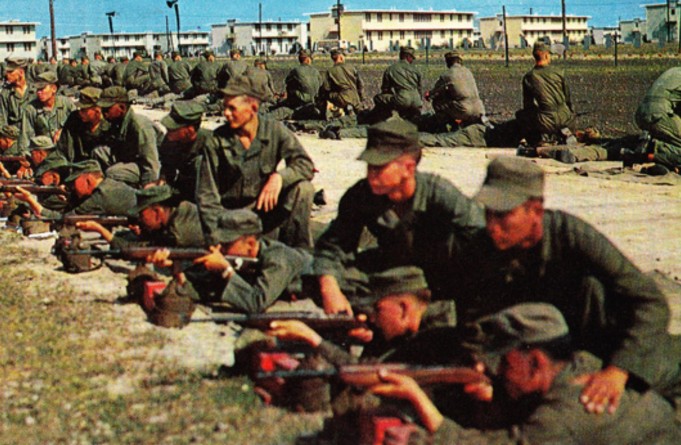 They marched us to the middle
of nowhere, sweat running down
our backs, our olive drab uniforms
now three shades darker.

They handed us a rifle, an M-16
they told us in class, with a 5.56
round, it would tumble after
it hit its target, good for killing.

We lay on the ground, shouldered
the weapon, aimed it at the
target, a bottomless torso and as
instructed, gently pulled the trigger.

Nothing happened, which is what
the Air Force wanted this day
for we were here to know our gun
to befriend it, to cradle it.

Another day we would come back
to the range, take our weapon, assume
the firing position and hopefully watch
the round tear a hole in the target.

And on this day, our sergeant said
we had finally become warriors, then
he quickly took the weapon away,
never for most of us, to be touched again.

First Published in Half Hour To Kill, August 2022
https://halfhourtokill.com/home/lackland-by-louis-faber 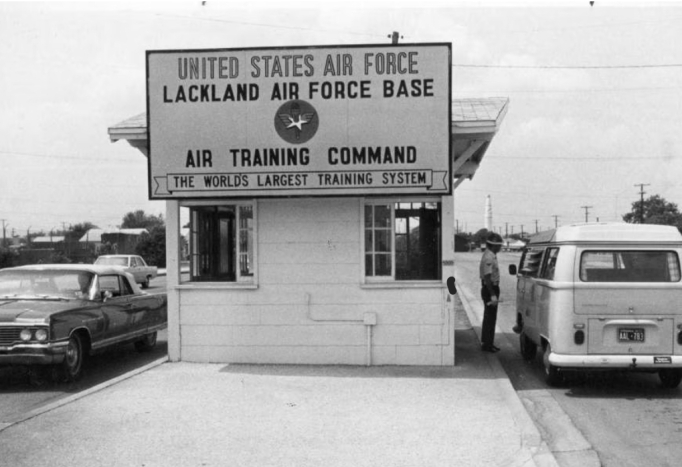 WARNING: A SHORT STORY, SO A LONGER READ THAN USUAL. BUT WORTH IT HOPEFULLY

He wondered why he allowed himself to be in this position. He
knew that he didn’t actually allow it, he courted it. But you could
claim allowance when you chose the lesser, by far, of two evils.
As a child, his mother always told him he was fragile, that he
should avoid overly strenuous activities and drafts. With the
Vietnam “conflict” waging, that was one time he thought his
mother right, one draft to definitely avoid. So he enlisted in the
Air Force. “Choose the devil you want to dance with, if you have
to dance with the devil,” a friend said. He didn’t think it would be
all that bad. Sure, he’d heard stories, but who didn’t tell stories,
other than him. He would learn. Lesson one was the large sign on
the gate, “Welcome to Lackland Air Force Base, Gateway to the
Air Force.” Gateway to limbo was more like it, though it seemed
a bit like hell.

They had been in line for what seemed like hours. In San Antonio
in April, when the humidity is up, minutes seem like hours. They
looked reasonably absurd, hair of all lengths and colors, a motley
of pants, and all in the sickly yellow t-shirt with U.S. AIR
FORCE across the chest. They entered the building in single file,
emerged moments later as motley as ever but each and every one
skin headed, courtesy of Lackland’s finest barbers (though he
doubted they had taken a single class in cosmetology). And they
looked none the better for effort.

The one thing you could trust was that if you felt the least bit
insulted by the Air Force, the injury that had to accompany it was
just around the next corner. At least they knew he was coming,
had the correct names on his uniforms. And the sort of fit. Save
the combat boots. “We’ll fix those tomorrow,” Sgt. Leal bellowed,
“just put the damn things on!” Then it was time for the ID Photo,
and a string of “stop smiling, moron, just look at the camera.”
And magically, moments later, he had grown four inches. When
he told Sgt. Leal he needed a new ID, Leal scowled, “No, dipshit,
you need to grow four inches. Get on with it!”

He’d always been a night person. Uncle Sam cured him of that in
about two days. 9 to 5 was once a working day he assumed. The
Air Force taught him that it was a sleeping night. And the alarm
wasn’t a trumpet call like in the Boy Scouts. It was the bellowing
of Sergeant Leal. Fifteen minutes later, they were showered,
dressed in the uniform of the day, always the OD’s, and in
formation outside the dorm. Yes, dorm, although the same
building across town at Fort Sam Houston was an old WWII era
barracks. A short march later and they were at the chow hall, it
was only amess in the Army and Marines, and with his daily dose
of SOS (shit on a shingle) and a silent prayer for the pig so cruelly
disposed of, then it was finally time to play soldier.

He remembered what it was like parading around in the Texas
sun. You didn’t use sunscreen, the asinine pith helmet was
supposed to protect you. It simply made you look stupid, you
thought, but one in a sea of stupid so you never felt out of place.
The uniforms were that olive that seemed to cry out “witness the
fool unable to avoid this drab outfit.” They gathered sweat as
would a sponge, but dried quickly enough since you would wear
them again in two days, and they wouldn’t be washed for a week.
You looked forward to night, when a hint of coolness arrived,
hopefully with sleep before the Drill Sergeant bellowed to greet
another day in the Air Force’s version of hell.

Far and away the worst duty in boot camp was kitchen work in
the Visiting Officers Dining Rooms. KP was never fun, but
usually it was dish out the slop that too often passed for meals,
scrape plates and load the industrial dishwasher, avoid the mess
sergeant or keep him happy and hide when you could. But the
VODR was a whole different world. You had officers from
countless countries who expected to be treated as invited guests
who wanted what they wanted when the wanted it how they
wanted it. And they dripped arrogance on a good day. It was
never a good day in the Visiting Officers Dining Room.

He was still four inches short of his goal when he made the short
hop from Lackland to Kelly, for his police training. He had be
told that since he would be trained for the Security Forces, they
would have to reissue his ID card. And this time there was an
even chance they would get it right. He held out hope. His hope
was misplaced, and when he was injured in a bar in downtown
San Antonio while still in training, we accepted a transfer into the
Air Force Reserves, with the stipulation that they wouldn’t expect
him to grow the missing four inches.

Be thankful you didn’t join the army, was his sergeant’s most
common refrain. Sarge was a lifer, or at least trying to hang on
until he could quit and never really work again. Wouldn’t know
how to do a real job, he said, and wouldn’t want to have to learn.
Nobody with half a mind joined the Army if they could get out of
it. He saw that at his physical with all the probable draftees
feigning this or that to duck service. Thing is, only real money
bought your way out, and he wouldn’t know that until years later,
once the war was no more than a faint memory to most.

Things went as badly in Security training as he expected. On his
first call, riding shotgun with two Security Forces officers, they
responded to a bar fight downtown where a half dozen Air Force
trainees decided to take on two Army Rangers. It wasn’t pretty,
less so when the last Airman standing decided to miss the Ranger
with the padded chair he was swinging and struck him. He knew
instantly his Security days were over. The Air Force agreed five
weeks later, transferring him to the Reserves. “And with a bum
wrist, we’ve got to change your assignment. You are now a Clerk-
Typist.”

That was the brilliance of the Air Force Personnel specialists. If
you have a bad wrist, they make you a typist. As one why and
he’s likely to say, “But your index fingers still work, right?” They
did, but the base doctor still said he wasn’t fit to type, so it would
be another day shuttling between the NCO club and the BX, with
a stop for lunch down the road at the Pig and Whistle. Even there,
the hot dogs had pork, but there was no shingle, so it was a major
improvement over his nightmares of Lackland.

Once in the Reserves, the rest of his service became a game: he
versus the Air Force. The Base doctor made it clear that he was
not fit for typing, the wrist continuing to be a problem. So his job
was to sit around and stay out of the way. But for most jobs in the
Air Force you could train by reading and passing basic test of
knowledge, not demonstrating any real skill. In short order this
clerk typist who couldn’t type (ironically though he could but for
the injury) became a qualified Medical Clerk, Legal Clerk,
Chaplains Assistant (a particularly useful AFSC on a base with no
Chaplain, and a Loadmaster Apprentice. Any job you could learn
from the books he did. He wouldn’t dare do any of them. That was
how the military always got into the messes it seemed to relish.
But it kept his NCO and commanding officer happy, and if they
were happy, well, you get the picture. But the wrist was no better,
and eventually the base doctor, a pediatrician by training, decided
it was time to get him help or get him out.

Then the fun really began. The wrist was still acting up so he
went to the V.A. Hospital. And that began the next chapter in the
Government That Couldn’t Shoot Straight (although it could shoot
itself in its foot with surprising accuracy). He filled out the
paperwork. He waited. It was like he was back in the Air Force,
the waiting, but no uniforms this time. Finally the letter. The
Army has no record of your service. A phone call, a patient clerk,
a “well that would explain it. I’ll put it right through. I can get you
an appointment Thursday in the Orthopedic Clinic. Don’t tell
anyone we fit you in.” No one would believe it anyway. And two
weeks after the clinic appointment, on his scheduled weekend
duty, the base doctor called him in to his office. The Captain of
his unit was there as well. He knew and smiled as he saw them.
“The VA says you need surgery and they have a doc who can do
it. Problem is they can operate on those still in the Air Force, so
you are being discharged. Honorably, of course. We’ll have the
paperwork ready by Sunday, so hit the Base Exchange (such as it
is) one last time, you will be a Veteran by Monday.”