My friends have often wondered aloud
why I claim to be most creative when
I am stuck on an airplane for hours.

I have told them that the solitude,
the lack of It is an interesting quirk
of the internet, that birth
and death are disconnected.

Seeking out those born today
I found a long list, the dinosaur
among which is Judy Collins.

That I still remember seeing her
reminds me at once a sense of my youth
and my ever progressing age.

But seek out those who died
on this day, and you hear the strains
of the Slavonic Dance in E minor

or the Sabre Dance from Gayane
but Popes Pius V and Marcellus II
suggest neither of them matter,

Heathens both, they claim, which
brings a deep laugh from Cleaver
and Livingstone, both of who

deny the other, and each says
that only he truly found the black
panther, and I’m thankful to be alive.to distract me,
which includes any airline approved movie,

that allows my creative self to emerge, to
express itself fully without reservation,
a status that being earthbound denies.

Many laugh, uncertain of how creativity
expresses itself, but certain, they
assure me, that my efforts have not

gone unnoticed, that my time spent,
but most importantly my results so well
reflect the surroundings of their creation.

She is a small woman
dressed in white, save for black
platform slingback pumps
and cherry red eyeglass frames.
She hunches forward in her seat
seeming as though she might collapse,
pouring over tables and graphs –
biochemical research papers.
You measure the depth of her attention
by the frequency with which she  pulls
single strands of hair from her banded ponytail,
strokes them gently, then, as if noticing they
have gone astray, tries to tuck them back in.
She pauses this ritual only to annotate
the paper’s margins in mechanical pencil
in a small, cramped hand, barely legible.
You know she has reached the paper’s conclusion
when she strokes that soft space
between those in upper lip
as though a teenage boy hoping
one day soon to grow a mustache.

I am pressed into a seat
that would conform only
to the body of some alien creature,
or so it seems, for hours
into a flight that increasingly
seems eternal, particularly for the baby
two rows back, who, like me
would much rather be anywhere else.
The crew dims the cabin lights
the universal indicator of “Don’t
think of bothering us, we fed you
and will give you a snack in the morning,
only if you behave, so
off to sleep with you all.”
As my back and neck rebel, I
remind myself it could be far worse,
the food poisoned, perhaps, not
merely inedible, for this, despite
appearances, is only the second ring of hell.

I am somewhere southwest of Alaska,

and I notice him, three seats over

and a row behind, a middle seat,

yet the Buddha doesn’t seem to mind.

He sits calmly sipping his Chivas

and rubbing his round belly,

He smiles at me, lifting his glass,

“One should not blindly seek pleasure,

nor should one avoid it

when it is thrust before him.”

He giggles as the edited version

of Kundun plays out on the small screen,

is what they all want to see,

so that is what they will see.”

He pours another sip of Chivas

from the tiny bottle, then slides

it into the seat back in front of him,

will be waiting for me in Tokyo,

never stopping to see that when

he stops inquiring, the answers

will all be clear to him, he could

as easily ride a snowboard to Nirvana.”

I glance back. He still sits there,

a small child sucking on a pacifier

with that same smile, that same

little giggle, and drifts off to sleep. 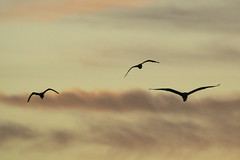 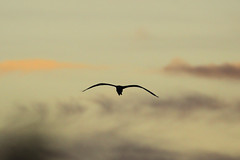 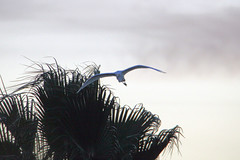