She is anything but little, huge wouldn’t be a gross overstatement. And I suppose you could call a overstuffed brocade cushion a tuffet if you stumbled here out of the Nineteenth century. And just for the record, she was munching on a well-aged brie and sucking down a Courvoisier-laced Greek yogurt smoothie. Oh, yes, did I mentioned she had been twice married to older men, one dead with two months of the wedding, the other divorced when his heart refused to give out on her schedule. So, Miss Muffet, I don’t think so. I didn’t sit down beside her, she plopped down on the edge of an intricate web I’d been working on for weeks. I barely got out before I was six microns under. So, at best she sat down next to me. And she left once she’d stuffed her face full of cheese, downed her smoothie, and left both her wrapper and cup on the ground for someone else to pick up, she pranced away, never even noticing me. And there, as Paul Harvey used to say, you have the rest of the story.

It would help, she said, if you
would stop imagining your life
as a barge moving slowly down
the Mississippi River, one
in an endless procession, following
like so many lemmings looking
without hope of finding a cliff.
Yes, she adds, from time to time
one may break free, it happens
but you have to admit that is
usually a disaster requiring
a significant clean up, not
to mention countless hours
of hand-wringing and questions
as to just how something
so untoward could have happened.
And, she concluded, it
just so happens that I
am sick and tired
of dragging you along
on my path to the Gulf.

I mean, seriously, did anyone really think that the Spratt marriage would ultimately last? Sure, the first couple of years were imagined bliss. And sure, their dietary desires did help them avoid almost all waste. But that big a difference, even if only seemingly in eating habits, foretells differences in other areas of life. He was a neatnik, she not so much. He didn’t mind, originally picking up after her, but after a dozen years, let’s face it, it got old. And she was tired of his comments about her diet. Sure, she had put on a few pounds of late, but that was part of aging. And really, she didn’t look that bad, not old and shrunken like he did. People in glass houses and all of that. And she was on the damned Keto diet, so at least she was trying. She knew it could not go on, so she reached out to an attorney. And it was the attorneys who picked their carcasses clean.

She walks slowly, the streets
she once knew well, so much changed
by time and memory released into the fog.
It is hard going back when back
is no longer there, where the store you owned,
a place where you spent countless hours
is now a sandwich shop, and
so many others gone altogether
for modern brick, concrete and glass.
Still there is a T-shirt which she
will wear as a badge of what was,
a play she will never forget, as I
remember the park in Salt Lake City
were mescaline and blotter acid
made the maples float above the ground
and we sat in the summer rain
and imagined golden butterflies
but that too is gone as are all
of the coconuts that once filled this grove.

She says you should not put
all of your eggs in one basket.
I remind her that I’m not
terribly fond of eggs, and only
rarely have more than one, and
in any event, I keep them in
the refrigerator to avoid spoilage.
She says, so why is it we
have no TV, no phone, no Internet,
tell me that, wiseguy.
I steer away from eggs and baskets
and simply respond, because
we have yet again been stranded
on that barren, fruitless island
known to all, hated by them, as Comcast.
We both shrug our shoulders
in resignation to our fate.

For years all I wanted was
a working familial cloaking device.
The kind the Romulans had
in the early days of Star Fleet.
It was easy to feel overwhelmed
amid them, teaming together
for holidays, reunions.
I never could, I never did
disappear though she felt my
sometime silence oppressive.
Now that I am part of that admixture,
I have found the device and cannot
for the life of me figure out
how to turn it off in the presence
of my own too small and shrinking family.

She carefully hangs her life
on the tautly stretched line
across her small back yard.
A sun faded floral housedress
a pair of bib overalls
knees worn white on
the kitchen linoleum,
cracked and dingy.
She waits patiently
for Humphrey Bogart to arrive
and carry her up
the river of her memory.
The chicken threatens
to burn in the cramped oven
and she is again without napkins.
He will be home soon
his six pack chilling
in the old Kelvinator
and she feels the slap
on her bruised cheek
as she fluffs her pillow
where she will soon hide
her purpled face.

She says every woman
should own a little black dress,
and during the time she tries them on
I am thinking what she meant was
every man should be married to
and in love with a woman
who wears a little black dress
as well as she does, but I say
It looks really nice on you,
You should buy it, and
I think, I will
find events to which you
can where it frequently, because
it looks so good on you, and you
in that little black dress
make me look so good
standing next to you, and men,
although they will never admit it,
are all so often about reflected glory. 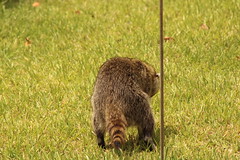 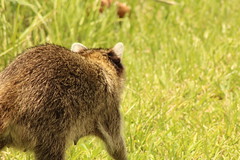 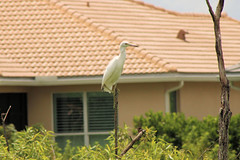